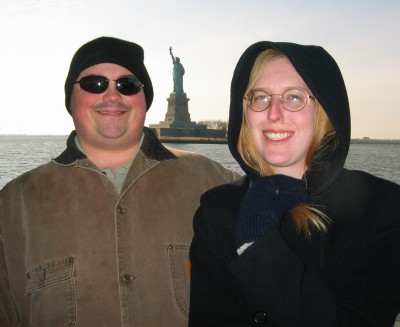 And if you’ll look to your left, you’ll see a picture of Ethan Canner and his wife Beth. That’s Ethan on the left. The giant green woman in the middle is perhaps Hillary Clinton… we’re not sure.

I’ve known Ethan since college at Lock Haven University. We met in the computer lab which is where we would be spending most of our days anyway. We were both computer science majors, but the internet was so much more interesting than C++ that it should come as no surprise to you that neither one of us graduated C.S. I switched to Business Management while Ethan went for Music which was always one of his passions. He ended up following up his LHU education by getting his Master in electronic music from Northern Illinois University.

Though our classes suffered for our internet addictions, our education never did as we had new and interesting things to learn, like how to use chat programs and how to create web-pages. Both of our original web sites (Mine & His) are still up and running. We both also made pages for some of the clubs we were in, but unfortunately those have gone the way of the trilobite. Ethan’s current web page can be found at the most obvious of URLS: WWW.ECANNER.COM!

The lovely lady above is Elizabeth Canner. Ethan & Beth also met at LHU and were married in 2000. I had the ultimate privilege of being Best Man at their wedding! Mayhaps one day I’ll get married too. =] Beth had an old-school homepage too, but unfortunately it is gone. If I remember correctly, it was, like so many homepages of the time, mostly pictures of cats and family members. How I miss the innocent days of internet youth! The Canners currently reside in Phillipsburg, Pennsylvania with their two little cats Kara & Macavity.

It takes nearly 6 hours to get to Phillipsburg from here so we don’t get to see each other as much as we used to, but we still communicate by our own patent-pending method that Ethan coined "E.M." or Eventual Message. It’s like I.M. but since we’re both online all day we don’t necessarily see the message right away, but we will… Eventually! When we do hang out we sometimes travel like in the picture above. We did the tourist thing and took the Ellis Island ferry past the Statue of Liberty in NYC. Whee!

Anyway, that’s my basic Ethan summary. ‘Till next time!

The apartment complex that I live in is a mess of litter. The property recently got bought out and – this is my theory – the new owners fired the old grounds crew that used to pick up loose trash so they could hire a cheaper “mow only” gang. The trash duties were then given to the maintenance crew who (of course) flatly refuse to pick trash. I can’t say I blame them. I blame the ass-clefts who munged the grounds in the first place. So pretending that all of the trashed washed down from the heavens (or down the local creek), I designated Saturday April 23rd 2005 as “Community Cleanup Day” because it was the first Saturday following Earth Day and because all of the grass and weeds were starting to grow in rapidly and it’s hard to get people pick ancient coffee cups out of thorny bushes, tangles of weeds, and clusters of poison oak. I called on my poster-creation skills honed as the Graphic Arts & P.R. chair of the Activities Council back in college and hung a few flyers in each of the local laundromats. I am, apparently,the Poster Boy for Community Cleanups.

Earlier in the week I had noticed that the community playground was a f’n disaster. It had more garbage than the discount bin at Used-Records-R-Us. It’s also at a central location. For these reasons, I decided to start the cleanup at the playground. On the big day Heather and I hiked over to the playground with 40 heavy-duty trash bags and 20 pairs of rubber gloves to meet the rest of the crew: 2 squirrels and a few birds. Nobody showed up! Not that I was surprised, what with the short notice and how people fucking suck and all. Anyway, after about a half hour Heather had to check out so she could get to work on time. I finished up the last 10 minutes and surveyed one hell of a better looking playground.

I repaired to my lair to change jackets and get a drink. I was a little surprised how much work it is doing bends and dips for 45 minutes. Never the less, I was determined to get to my secret goal for the cleanup. You see, I walk through this lovely little forest path on my to the bus stop every morning and it’s the sorriest example of ‘nature’ that you’d ever want to see. It’s only a few hundred feet long, and the ground is covered on both sides of the path (and 50 foot into the forest) by THOUSANDS of coffee cups, beer bottles and other miscellaneous trash items. You can hardly see the forest through the greeeze. This had been pissing me off for nearly a year now and I intended to clean it up, so off I went to the doom of my quads, lower back and ham-strings. I decided to clear the west side of the path first.

After an extended break to recover and patch my wounds (Apparently broken glass stays sharp for years while rusting things just get sharper and rubber gloves only do so much) I returned to the battlefield (ok, trail). At first glance, the west side looked the worse of the two sides. Unfortunately, this was wrong. Each fallen leaf seemingly hid some remnant of last year’s (or last decade’s) coffee break or beer binge and this side took me an extra half hour & 1 more garbage bag. Litter Lore: Bottle’s and cans far outnumbered java cups on this side of the path. This leads me to an undisputable scientific conclusion: Coffee lovers are right handed while everyone else tosses garbage with their left. It’s fact, except it. Of all of the odd things I found (see pictures below), the most disturbing was the extra-large suitcase containing the military issue combat boots and the reflective vest that read “police”. If there’s a story behind this I do NOT want to be affiliated. There was no ID on the suitcase, boots or vest so it all went in the dumpster with the rest of the castaways.

Nature doesn’t really mind trash at all. Every time I’d flip over something plastic with a flat surface or sheltering concavity, it would be teeming with life underneath. Ants and termites LOVE to make nests under plastic things with little hollow spaces. I seriously inconvenienced more than several bug colonies in the cleanup process. I also learned that a semi-opaque plastic bottles will eventually fill with earth, seal itself and become a greenhouse for various mold, fungi and moss. In fact, the most vibrant plant life that I found was in plastic bottles. I gotta agree with George Carlin. “The Earth doesn’t share our prejudice towards plastic.“

Finally, I learned that people will act irrisponsably whenever they think they can get away with it. What’s one more beer bottle among hundreds of others? It’s not all not wanting to carry a 3 oz. bottle another 20 yds. It’s more about group dynamics and showing your boys you are bad by tossing a few back in the deep woods (100 foot from your mom’s apartment) and then leaving the cans lay. It’s more about spitting in the face of that cop who pulled you over in 1979. It’s all about feeding the ego. Don’t believe me? Next time you see someone litter, call them on it. Burst their little ego-bubble. You’re much more likely to get an angry reaction then if you called them on oh, say jay-walking. I’ll write more on Ego in another Dripping at another time. 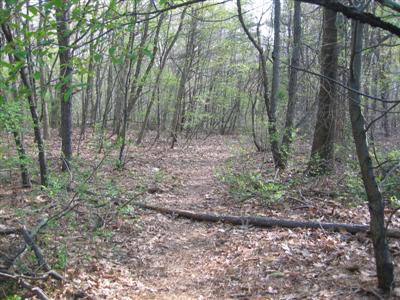 1 Week later:
My quads and lower back were sore, but I had protected them well. Alas, I didn’t protect my hamstrings and torqued them every time I bent over. I couldn’t jog for 3 days due to the damage! Next time I’ll get a stick with pointy thing on the end for trash pickup. With the path now clean, it was obvious when someone would litter and I’m disgusted to report that the littering has continued unabated since I cleaned it up. Some of it actually seems to have been done, not out of standard human laziness, but rather sheer spite. As a warning to those would destroy what I have worked for, I took a littered coffee cup, stabbed a sharp stick through it and left it sticking out of the top of the trash can like a medieval ‘head on a pike‘. Hopefully, this is a universal symbol that delivers the message no matter what language the purp speaks.

2 Weeks later:
The litter bugs completely take the day off when it rains. Even when it stopped raining, I’ve only seen 1 bit of potential litter this week so I hope that the initial “Help, someone made me feel guilty! I better act bold in front of my friends/ego” feelings wore off. Or maybe Woodsy Owl swooped down and gave them quite the pecking. One can only hope.

5 Weeks later: (My final check-in report)
I spoke too soon in my last entry. As soon as the weather dried out, the shit-heads returned to their old ways of nearly daily trash deposits! I’ve managed to narrow down the window when the trash might have been littered and even the gender of the offenders (There’s at least two). Eventually I’ll catch one in the act and do horrible unspeakable “Temporary Insanity Plea” things to them. I’ll enjoy the hell out of it too because when they throw their cup on the newly cleaned ground 10 yards from the trash-can they spit in the face of all that’s still good and right with society. I’ll remove them from society or kill them trying. Happy jail time here I come!