Friday: I made 3 stops on the way home from the office to find the best looking red roses and then transported one dozen of their finest home on the bus. I hid them in the trunk of my car and headed inside. I was surprised to learn that Heather wasn’t home yet but had run out for some groceries for dinner. This gave me the opportunity to quickly smuggle a vase of water out to the flowers so they’d still look good the next morning. I quickly filled our heaviest vase with water and headed out. I opened the front door only to be greeted by Heather herself just getting out of her car. Thinking quickly, I hid the vase in my profile and used the water to quench the thirst of the flowers on our front porch and then hid the vase back in its cupboard. Later, I made an excuse of putting away a rarely used pitcher in that same cupboard and spirited away the vase to give the roses some necessary water. All was ready for the big day. 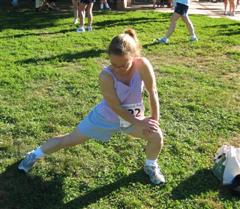 Saturday – pre-race:
We woke up extra early to make sure we had time to do all of the things that needed done. I packed a bag full of race supplies like snacks, motivational material, extra water & two big time surprises. We feasted on cereal & power bars. Everything was going smoothly and I was excited. Heather commented that I looked like a proud parent on their kids first day of school. I was excited alright, but not for the reasons she suspected! The race was the “ 12th annual Saturday in the Park 5K” which raises money woman’s shelters and is organized by the Jersey Shore Running Club. Heather chose this race because it was big but not super-competitive and since it was for women, it could be her race. I’d just be there for support, not to run. It really is a nice race – through a park on mostly crushed gravel and sand. I insisted on driving “so she could relax on the way” (and because I had the flowers in My trunk) and we arrived with plenty of time to get signed up, collect the race swag, get stretched and psyched. Heather lined up at the back of the pack because she was worried about getting in the way of faster runners. It turned out her fears were unwarranted as slower runners (and race-walkers) actually got in her way! At precisely 9:00 AM the race directory shouted “GO!” and they were off. Over 500 woman (and a few men) galloped up the opening hill and into history.

Heather (center) begins her run up the hill

During the race: Man, as the great sage and eminent philosopher Tom Petty once said, “Waiting is the hardest part”. I knew I had at least a half hour to wait and no way to watch her progress so I bounced around trying to keep myself occupied. I talked to the people at the finish line and managed to track down the official race photographer. His name is Bob and he works with the Jersey Shore Running Club and photographs all of their events. The shots he takes are available to browse & purchase at Dotphoto. I happened to mention what I had planned and then wandered off to find a place near the final stretch so I could await Heather’s arrival. After about 25 minutes I could hardly stand it and had to go for a jog myself just to relieve tension. I jogged to the car and retrieved the roses then jogged back to the race course. I noticed that Bob was standing nearby taking pictures of the racers as they neared the finish line and, being just outside the worst of the commotion, I thought this would be a GREAT place to pop the question. It was! 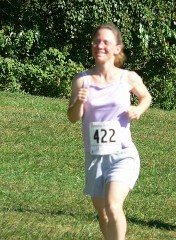 At around 36 minutes Heather can emerged from the
forest and hit the clearing. I had the flowers ready and made sure she saw them as she jogged up. She saw the flowers and my frantic waving and yelling of things like “Yeah Heather!” and grinned a winning smile (See picture at right!). Though she was urged by the photographer and a few bystanders to take the flowers and run with them the final 100 yards or so, she admonished us saying that it would mess up her finish time! “Now THAT’s a runner!” Bob was heard to say. “Then kick it!” I was heard to retort. And that’s exactly what she did, sprinting the final 100 yards to an official finish time of 37:54. 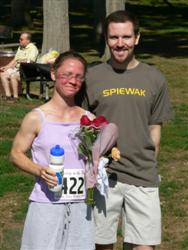 Post-Race: I jogged down to the
finish, found her among the crowd and officially presented her with the flowers. Then, being the good coach that I am, insisted that she continue to walk for whatever reason it was that my old track coach used to insist that we walk after races. I walked her right past all of the people, tents & water stations back to the spot where I had been waiting… right by Bob the photographer!

Bob snapped our picture as we posed with the roses, then I asked Heather to put her things down because I had something else for her. From my pocket I produced a RoadID which is basically a dog-tag for runners since we never carry ID with us when we’re jogging. They attach to your running shoe so you’ll always have it with you when running. I knelt before her in the standard Proposal Pose as if to attach the ID to her shoe, and, as she started to read the ID, I brought the ring box up and held it aloft. The ID had her name, town, phone number & a few extra contact numbers in case of emergency. On the ID I had listed myself as her first contact and I saw Heather’s eyes flick toward mine and a smile tug at the corners of her mouth for a second as she read it. The next number was that of her Mother…

…and the bottom line simply read: “Will You Marry Me?”

She looked into my eyes and without a moments hesitation, even before I could ask, she said YES! Undaunted, I held the box up higher so she would finally notice it and asked aloud. She said yes again, but had trouble getting it out as the emotion had bubbled up, then over. I stood up, my hands shaking like a leaf and, just to be sure I heard her right, asked again “Yes?”. This time she was unable to speak and answered me with a nod and a kiss. As she pulled back laughing, she took stock of her surroundings and noticed 3 photographers happily snapping pictures of the moment. I had only told one person, but good news spreads quickly! Heather’s not the biggest fan of getting her picture taken and the emotion of the moment was, I can only assume in retrospect, overwhelming because the next thing she did was to use a bad word to describe me. I admit, I deserved it… and she was laughing and crying when she said it anyway. She was reasonably certain that she would know when it was coming, but I managed to surprise her anyway! Finally, she allowed me to place the ring on her finger and, after thanking the photographers and giving out our email addresses a few times, wondered off to join the rest of the racers and get ourselves some much needed orange slices, bagels & sports drink.

Rules of Engagement: When proposing marriage to your girlfriend, there are a few rules you should follow:

With the big three in mind I went way over the top on each getting a larger stone than she asked for (She deserved it!), proposing in in the vicinity of 600 people (they wanted to see!), and talking to her entire friend and family subset before popping the question (they wanted to know!). Did I go to far? Sure. I’d do it again in a heart-beat.

Links to yet more photos: