I have several little things that are itching at me (the least of which isn’t this tick bite!) and want to get them off of my chest (that’s where the tick bit me… bloody parasites! (actually, that’s exactly what they are… but I digress)). This might get long. Skip ahead to points 4 & 5 if you have a short attention span.

Point 1: I’m sick. Not the kinda sick where you wish you were dead, but rather the kind where you want to sleep a lot and need to *ehem* sit down a lot. Also I have what I call “creeky bones”. This is one of my least favorite types of colds! I’m sure there’s a medical term for it, but when I get the creeky bones every joint feels swollen and my eyes feel sore when I swivel them hard in one direction. The worst part is I know for certain that this is the kind of illness that degenerates into the “Forever Flowing Nose”. *sigh*

Point 2: A strange thing happened to me the other day. I was just sitting at my computer desk at home when I thought I heard a noise coming from my PC. The normal cadence of the fans wasn’t just so. I put my hear onto the desk (as this is the best way to pick up the subtle vibrations that I was trying to hear). Nothing. I stooped and listened to Heather’s PC but didn’t hear anything strange.When I turned around I found my monitor had gone completely blank! It’s still blank and sitting on the floor in a mostly useless kinda way that only a broken monitor can accomplish. My big question and the reason for me babbling is this: What sound does a monitor make before it quits? I’m going to guess it was a high-pitch whine. Or maybe I’m psychic. Or maybe I’m Super IT Guy and I have spectacular powers beyond the understanding of mortal man.

Point 3: Speaking of psychic abilities and super powers… Once upon a time (ok, it was like a month ago), I was walking from the Bus Station to the office and I saw one of those bus-stop advert posters that had some rough looking character dressed like a biker chilling out and looking just generally hectored. The caption said “Take a Stand – May 26”. Obviously since May 26th is my birthday I was left with many questions. What’s with the leather man, what kind of stand should I take and why do I have to wait until then? A few days later I saw another poster. This one featured a woman with white hair and way-tight clothing. Aha. This time I recognized that these were teasers for the new X-Men movie due to open on my Birthday. The sad part is that I was too distracted by the date and phrase “Take a Stand” to notice that the “biker” had 8-inch metal claws sticking out of his hand. I’ll chalk it up this being just all too common in NYC what with all the fancy nail salons and all. Here are two of the posters: 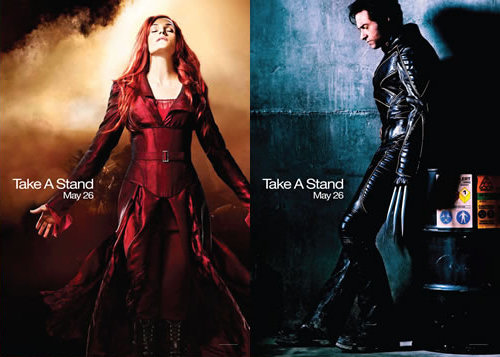 Snapple is good stuff, but they don’t necessarily know their stuff. For years now I’ve been reading the pithy little trivia nuggetitos they print on the underside of their caps. They call them “Real Facts”. Misleading, I decried! I set about to researching some of the more unbelievable “Facts” and, although I couldn’t prove or disprove most, I was astounded to find that the ones I could prove were correct! That is, until I came upon “Real Fact #163”. It read “The first penny had the motto “Mind your own business”. Myth! The first penny was the 1787 Ben Franklin Cent also known as the Fugio Cent(Latin for “Time Flies”). They clearly do NOT include the word “Own”. Of course I’m just being pendantic, but hey, that what “blogs” are for, no?

I think it’s funny that people don’t even NOTICE the missing word “Own”. It completly changes the meaning of the phrase from “Take care of yourself” to “Stay out of my way”. While staying out of other folks’ affairs would make the world a better place, actually minding yourself first would be a much better start. I hope you would agree.

That brings me to Point 5 and it’s related to Snapple, but first, a brief soliloquy on Hope. Many poets and writers and every wordslinger in between has expounded on Hope as the one of the greatest of all human emotions & virtues, as the greatest gift that one can give, as something to exploit, et cetera and so forth. I agree it’s many things, but it is also a Four Letter Word. Nowhere are the multiple levels of hope more evident than New York City. From the up-and-commers to the down-and-outs, so many suffer from either too much or not enough. Striking a balance of Hope and Rationality is fundamentally important to the ultimate goal of Serenity. Want an example? Sit in the very back of a New Jersey Transit bus one day and watch the bus fill up. There are two seats on each side of the bus – four to a row and of course nobody wants to have a partner in their little row so empty rows fill up first. The bus will basically fill front to back but once in a blue moon there will be a completely empty row way towards the back even after many of the sternward seats are doubled up. If you’re sitting back there already you can watch the faces of the people getting on. First they look at the seats immediately around them. Then they start walking straight back with a look of Raw Hope on their faces. It’s comical and sad and sometimes I want to help them by waving them off and saying, Nay sir! Stride not to the back where we are already crammed in sardinously! Stop where you be and take that seat next to the Up-and-Commer with the Crackberry glued to his head! Alas, they can’t hear me … they’re lost in Hope. I call them floaters and they float straight past all of the “Decent” seats looking for the Blue Moon Silver Bullet Magic Elixir empty row. Hope Floaters. I can spot them a mile away. Too bad it’s only a matter of time before that honest hope is crushed into the commuters reality that all of the seats suck on N.J.Transit.

Am I lacking hope? Nah. Do I have too much? Sometimes! I’ll end this diatribe with a bit of sorry humor. A year and a half ago Snapple ran a marketing campaign around their “Real Facts” caps. It was a contest of sorts and if you collected the right caps you won prizes. Well the office had a ready supply of Snapples at that time and I happened to have found a good bargain at the local food jobber so, naturally, I started collecting the caps and hoping I would win. When I didn’t win immediately, I did what any blue blooded American would do. I cheated! I picked up caps from bottles I didn’t even drink! Still, I needed more caps to give me a snowball’s chance so while I mentally remembered Mr. Franklin’s “God Helps Those Who Help Themselves” I started snagging all of the caps I could find – including those on eBay. Yup! People were selling them on eBay. Just random bunches of unsorted caps. I had done the math. I had eliminated the ‘neutral’ caps. I knew the 10 or so that were the real “winning” caps. I hoped the guys selling the caps didn’t know as much as I did. Long story short. I won NOTHING, but I had fun sorting all of the caps and making Heather think I was nuts. I did take a picture of the mess I made when I was done and the contest was over and my hopes were crushed. Here it is for all of the world to see!


That’s a few hundred Snapple Caps there folks. Yeah, I was sick with The Hope. Such a shame. Still, it does make life interesting and gave my cat something to bat under the desk. Oh, and as a side effect, I totally aced Snapples’ silly Real Facts web game! That’s me, E.L.D.! 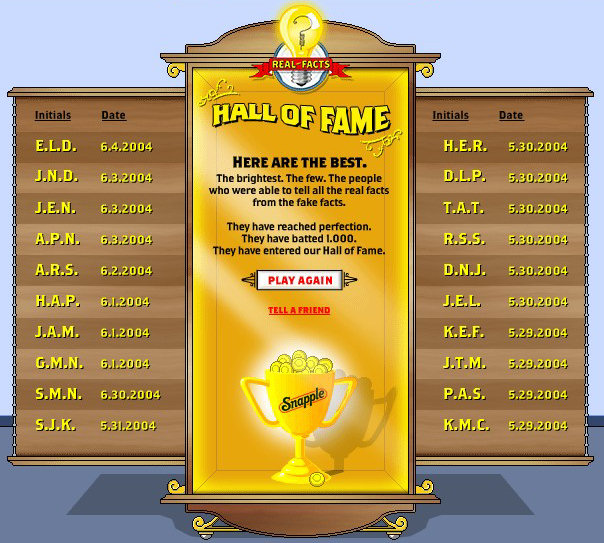 This thing we call English is awful who have to learn it. Period. From the bizarre (bazaar?) spelling to the sentence structure that which is convoluted, it’s amazing that this language hasn’t just been under rug swept long ago. Yet, since it seems to be a persistent little language (and since it’s the only one I can type in) I’ll use it here to illustrate just how difficult it must be for those lucky people who’s language is not only much much older, possibly simpler, and actually reads left to right and downwards upwards and has millions of characters… I speak of course of the Dutch.

Anyway, I bring that up to speak on this: “Engrish” is the term used to describe the attempts at English often found accompanying that “Made in China” label. We applaud the honest
effort at this beast of a language, but we also can’t help but laugh when the result is a fabulous malapropism, unintended misnomer or complete and utter gibberish. I have in hand a perfect example of all of the above. Here’s the story: I was touring scenic Lancaster County and realized I forgot a toothbrush so I picked one up a local Hess station for $2.19.

Unbelievable but true… there’s a market for everything. My Colgate was a Counterfeit!

I guess if I had inspected it more closely I would have noticed the cheap looking, poorly formed plastic bits that made up the handle. I guess I could have detected that the soft rubber ‘gripper’ was actually just shiny plastic too. But what should have grabbed my attention was the lack of a ADA seal. Instead, it featured a seal of the “China Preventative Medicine Institute”
inexplicably abbreviated CPMA. Not enough evidence? How about the zip code for “Colgate-Palmolive” – 510075.
Why would someone bother to counterfeit a toothbrush that normally sells for under a buck-fifty? It’s obvious! This knock-off toothbrush probably saved the Hess Corporation 2 bits worth of profit. I just wish I hadn’t USED it before noticing the packaging. Hopefully the Listerine killed the spider eggs, Hantavirus or whatever else this thing might have been carrying…

Without further ado, here’s a scan of the packaging, along with my favorite lines. (The lines line up with the respective spots on the graphic – if and only if you are using the same browser settings I’m using which is about a million to one shot. You can make the font size a bigger/smaller by holding down the CTRL key and rolling the mouse wheel.)