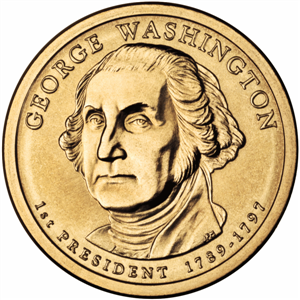 Is that an irate Washington or what? I would just like to point out a travesty that will befall our country in 2012. I mean besides the end of days thanks to the Mayan Calendar! I’m referring to the new dollar coins being stamped out at the US Mint. I don’t have anything against the mint trying to make a mint by making me try to “be the first kid on your block to collect them all!” but I do have a problem with them elevating Cleveland to “Super Grover!”. You see it went like this: President Cleveland lost to Benji Harrison (Defeated by the electoral college!) after only one term. Then Harrison screwed up, lost the support of this party & was defeated by the best foot the Mugwumps could put forward: Super Grover, presidential retred! This made Grover Cleveland the 22nd president & allowed him to claim the 22nd & 24th presidency. Note the difference between President & Presidency here folks.

Slash forward 120 years & congress has decided to put all of the presidents on the coins. The trouble is that despite Congress making a special provision for the “REDESIGN AND ISSUANCE OF CIRCULATING $1 COINS HONORING EACH OF THE PRESIDENTS OF THE UNITED STATES” they’ve gone & done pissed off George Washington, Abe Lincoln & even Franklin Pierce by giving Grover Cleveland TWO, count them again, TWO full sets of coins! Are we commemorating the Presidents or Terms of Presidencies? Are they really stating that Cleveland was two unique people capable of being two presidents? Is there precedence?

Way back in the days when A Renaissance Faire was just called “A Faire”, King Henry The Sixth was succeeded by Edward the Fourth by some nasty business. Then the comeback music started & Henry The Sixth took back his throne becoming… Henry The Seventh? Of course not! We wouldn’t see one of those for another 15 years. Grover is simply El Presidente the 22nd & nothing more. It simply boggles the mind that a guy who lost the popular vote, slipped in anyway & then went on to become a One Termer not once, but twice is going to have double the number of coins in circulation as Adams, Roosevelt & Bush. Well, bad examples by name there, but you get the idea.

This cannot be allowed to go unnoticed! I say this good people: In the year 2012 – do not, under any circumstances accept a Super Grover coin! If it has the number 24 on it, refuse it as you would a pine nickel! This is a man who had his sister for the First Lady (Look it up!) then married a woman 26 years younger than himself! Ok, that’s actually pretty cool, but he never even earned a collegiate degree. Yes, he’s one of our Presidents, but in the end he was just another Lawyer from New Jersey.