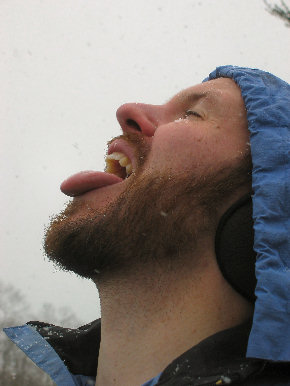 This past weekend I ran in the world famous Mount Penn Mudfest in Reading, Pennsylvania. It’s a trail run that takes you up and down as many hills and through as many mud-pits & streams as the race designers could fit into 15 kilometers.

When I first heard about the race from my cousin Terri I thought it sounded like a really good time but too darn long of a run. Since then I’ve been training on trails, hills & mud for a few years and little by little (by very little) getting my mileage up. Last year I ran my first organized 10K (6.2 miles) so this year the next step was obviously the 15K!. Of course, I can’t do anything the easy way so I have to try the grungiest 15K anyone has ever conceived.

The weather didn’t make things any easier either. I don’t like running in the cold so the temperature was a balmy 29 degrees when I got up on race day. I had my bowl of Wheaties and a large helping of grumpies. I might have felt better but I forgot my Under Armor and was going to spend the next 2 hours or so freezing to death. We arrived at the race location about 45 minutes before it was set to start. About 15 minutes later it started to snow lightly. 15 minutes after that it was a minor blizzard! It wasn’t getting any warmer either. FINALLY, nearly a half hour late, the ceremonial pig was fired into the air and the race was on! I stayed all the way in the back of the pack because running anywhere else was near impossible. The race is capped at 850 runners and many of the trails are just wide enough for single file & no passing. Terri was also running the race so I caught up to her and we pretty much hung together for the duration of the race. I enjoyed hurtling over the fallen logs (there were at least 60 such logs) and dancing over the frozen rocks while others splashed through the streams (4 times). Some hills were walked. Some were climbed on all fours. One was an out of control downhill slalom that ended in a creek. It was fun, but tiring & despite the cold (it never came close to the weather channel’s prediction of 40 degrees) I was sweating like a hog after a few miles. 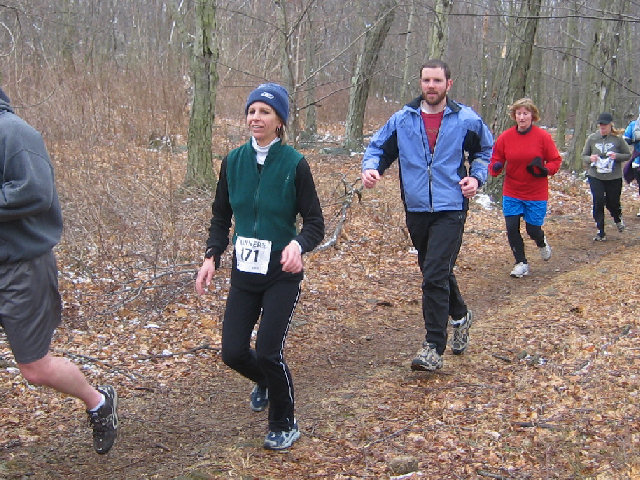 There were a few surprises along the route. I found a hidden easter egg on the trail that was worth a door prize (for my caching eyes!) & around the 7 mile mark there was a “Dehydration Station” which, unlike the typical water stop, provided “alternative beverages”. *wink* I saved just a bit for the final kick and sprinted over the finish line with an official time of 1:59:09 1:58:00. Of course, with races like this one nobody really cares about their time (the evidence of this is that apparently the official clock didn’t start until 5 minutes after we started – time stamps on the photos don’t lie!). The after party featured a live band (Ok, a 70 something husband & wife team), lots of food & drink & about a million door prizes. I have a t-shirt & a commemorative coffee mug to show I finished.

The bottom line is that I survived and did better than I thought I would. Two days later I’m barely sore though I think the post-race massage from Heather helped a good deal. I don’t know if I’ll run it next year but I’ll certainly remember it forever.

The RESULTS are in!