After training for the past several months for no particular reason I decided I wanted to run an official race this fall. A race on a Sunday in which Heather could participate would be perfect. Enter the Navesink Challenge – a local race that featured a 15K & 5K along with an after-party at Outback Steakhouse. Perfect! We pre-registered and were all set.

The weather looked to be a potential rainy problem early on but the night before forecasted that the rain shouldn’t start until noonish. Of course it decided to start at 5 AM instead. When the race kicked off at 10 AM it was 41 degrees and raining. Yuck!

The 15K started 10 minutes before the 5K and I misheard the announcement. As the starting gun sounded I was clear on the other side of the field so I ended up starting dead last. Fine by me. This way nobody can pass me!

I had decided early on that I would attempt to run every step of the race. The last time I tried a 15K it was the Mount Penn Mud Fest and the trails were often steep, narrow and crowded. This meant I had to walk portions. As I ran it with my cousin Terri I didn’t mind the walk as it gave me a chance to catch my breath and keep up my end of the conversation. I only walked a few tenths of a mile over all but I couldn’t really say I “ran” a 15K now could I?

This time I’m proud to say that I did run all 15K except for a studder-step-dance while I tossed a water stop cup. It got a little hairy early on when I hit the large back-of-the-packers trying to funnel over a narrow bit by a steam. I went over a guardrail and around about a dozen people but didn’t have to stop and walk! Most of those folks passed me in the next few miles but I got the positions back on the hills. I’m much more of a sprinter than a distance runner so hills don’t bother me as much as they do others. Well, the uphill parts anyway.

The downhill parts give me another problem – bouncing. For the final long hill I decided to spare my quads the typical pounding and just increase my turnover and wheel down the hill by converting some of my forward motion into bounding strides. For some reason this creates side stitches on my right side as the bouncing does something evil to the muscles. I’m no doctor but I know what hurts. With only a mile and a half to go I started cramping badly. It completely locked on me with just under a mile to go.

I could either walk and try to get the cramp out or I could (literally) gut it out and finish slow. I finished slow. 8 people passed me on that last stretch which was disappointing as I had worked really hard to get past them in the final few miles but at least I finished and accomplished my mission!

It rained off and on throughout the race but, thanks to an early Christmas gift from Heather, I was warm and dry in my weatherproof jacket. I had picked out the jacket a few months earlier and didn’t think I’d need it until true Winter hit but I was glad it was available today. Nature is all good but nothing beats good new-fashioned petrochemical science-crafted synthetic goodness to keep you comfortable when the weather gets ugly!

After I finished and walked off the cramps I found Heather and learned that she finished her 5K successfully and even thought she could have went longer. Yay! Adding to the fun was that my bib number was lucky 75 representing my birth year & winner of a random prize – a t-shirt and bag combo. The bag says X-C and features a cross-bones motif. I guess this means Cross Country. Hey, what do you want for free-random-prize-swag? Heather won a door prize too so both of our numbers came up lucky today!

Heather hooked me up with a sports massage when we got home and then we cashed in our free appetizer & drink voucher at the local Outback and enjoyed a victory meal. I think we earned it.

After seeing her picture on the results page Heather remarked that she wanted to do another race. I’ve created a monster! 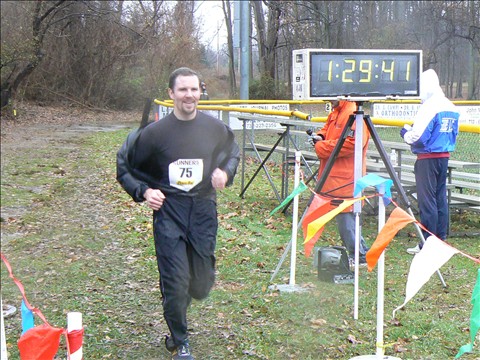 Eric grunts through the finishing chute