It had been a few years since I was able to “win” one of Woot.com’s infamous Bags o’ Crap. They focus on tech stuff and typically sell just one item/day but every once in a while their warehouse fills up with crap they just can’t sell … so they sell a bag of crap for $3. I don’t know where the fascination with the unknown comes from but if Monty Hall has taught us anything, it is always take what is inside the box or behind the curtain! Usually within seconds of a BOC being posted for sale the whole site melts down as the orders come in at an incredible rate making it impossible for most of us to get in there early enough to get one of the few special treasures. Fortunately, they provide a Christmas Miracle every year giving us an extra chance – if we stay up past Santa Time on Christmas Eve. At 1AM EST on Christmas Day a BOC hit the site and my order managed to slip through. This year they obfuscated the “buy one” link to prevent internet trolling robots from buying them all up and I, a mere human, was able to get the BOC that I earned by being a good boy all year.

Anyway, they ship the things by FedEx SmartPost (aka, someone walks it across the country periodically stopping to smell the flowers) so it took 23 days to arrive at my door. The bag was actually a box and in and of itself was a crap as it had nearly torn through on the bottom. Fortunately, my promised three craps were safe inside. This is what I received: 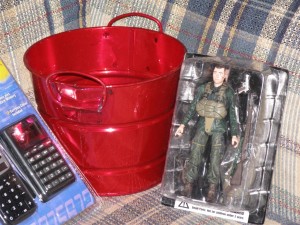 1) Not one, not two but *TEN* pocket calculators! Yes, believe it or not, small electronic gizmos used to come without built-in phones. These come full featured with off buttons!

2) One “Pail # 5 Bright Red” From Buquet Supply, INC. Made in Mexico. This bad-ass bucket is made of metal and the kinda red you only see on the nails of a professional manicurist.

So, am I happy with my crap? Of course! I always remember the primary crap  rule: Thou shalt not get the crap you want, thou shall want the crap you get.