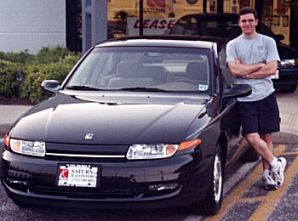 Back in February I received an email from General Motors. Being a Saturn Owner, they wanted me to know that they would be more than happy to sell me a new car with a nice discount.

The bold print said we are family. The fine print told me that Saturns were excluded from the special.

It was about that time that the front end went out of alignment. Nothing major. Just one more bit of character to the car. I promised myself I would get it aligned the next time I had it in the shop. Well, it didn’t need any work for the next few months and then on Easter weekend, while I was on my way down to South Jersey for Easter Dinner I hit the mother of all Jersey Potholes while getting onto the Turnpike. It threw the alignment way out of whack but the car was drivable and nothing is open on Easter so I enjoyed my meal and once everyone was back to work I made an appointment to have the front end twiddled. I took it to a tire place (which should have some experience in alignments) and was told that the sub-frame had bent and would have to be replaced. $900 if I went with a used part. They warmed me that it wasn’t really safe because it was a control issue. Having just driven it close to 200 miles, I didn’t really listen because I felt I could get it home while I mulled over my mechanical options.

I never suspected the 4 mile ride home would be the car’s last ride.

If the car was going to sit for a while it’s a bad idea to let it sit with a nearly empty gas tank so I pulled into the Wawa… well, almost. I made it most of the way in and then the wheel fell off. Well, almost. It tore free and wedged into the wheel well. The frame was apparently not just bent but nearly rusted through. It gave way and snapped the axle like a twig. With a sick grinding noise I came to an abrupt stop. I could never get a straight answer when I asked what the “L” stood for in the model name of the car. I think now it was for Luck because his could have easily happened at 70MPH on the highway! As luck would have it, I have AAA PLUS which allows me a 100 mile tow so, of course, I break down less than a mile from my house. I was only a few miles from a trusted mechanic so I had them tow the car there and Heather ferried me home. We called up the insurance folks (NJ Manufacturers) and was delighted to learn that pothole damage falls under my collision coverage. They grabbed the wheel, as it where, and set things in motion. 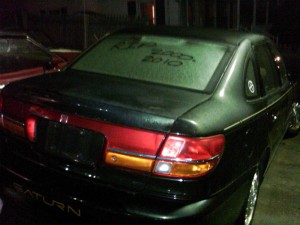 The damage was considerable. Besides the axle, the strut, brakes, control arm & rocker panel were needing replaced and the transmission was leaking badly. The estimate was $2525. Given the age of the car the insurance folks decided classify my car as a total loss. The next few days saw me behind the wheel of a rented Altima and scrambling to learn everything about the current car market. In retrospect, I should have been paying more attention the past few years. Also in retrospect, if I had heard “Dude! Your wheel’s gunna fall off!” instead of “It’s a control issue.” I probably would have had it repaired. Now it’s too late to save my baby!

Earlier today, the salver (A salver salvages cars, get it?) came and took away my car. The salvage value was $315. Ouch. Cleaning it out and taking off the plates was hard. Signing over the title was harder. 10 years ago I very thoroughly researched the market and made what I still believe was a good decision with Saturn. There was one unconscionable recall 5 years ago (just as my warranty ran out) but other than that the car required very little work and never let me sit. In the end it needed tires, the A/C didn’t work, the mirrors had to be adjusted by hand, the keyless entry required a key & I had dinged and scratched the car in several places. It had character! It also had a four wheels and you need every single one of those apparently.

I’m still researching cars and thinking of going a little bigger. Something that fits my more active lifestyle without giving up too much gas mileage. I wish I had a little more time to mourn but I can’t keep the rental forever. So long Saturn! You were a good company. You were a good car. Maybe that “L” stood for Love.