After much hemmage and hawdling I decided that this would be the year I finally upped my miles and ran a “half”. That’s a 13.1 mile race with my current long being 15K or 9.3 miles. I’ve been told by a few people that if I can run over 9 miles then 13.1 is just mental.

Not entirely. I’ve broken down every time I’ve tried to get my legs to churn out more than 5-6 miles at at time for a few weeks. The most I’ve ever run in a single week is 18 miles – and that broken up into 5 easy runs. What I’ve learned from these set-backs is that my miles have to come off-road. I deliver too much of a pounding to my joints when I run on the streets & sidewalks. In the Summer my form suffers as I get dragged down by the heat & humidity. There’s no hotter place to run in the Summer than on blacktop! So, I’m spending more time outside in the perpetual 90 degree days and netting most of my miles on trails. For these reasons, and because I get BORED looking at cars going past during a run I needed a trail run half marathon which is somewhat rare. 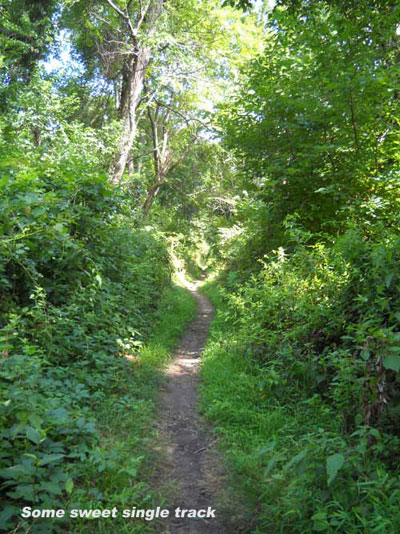 The first one that came to mind is the “Half-Wit” race in my old hometown of Reading. It’s nationally recognized as an annual train-wreck. It is half trail-run and half trail-blaze with stream crossings, unnecessary hill climbs, sticker bushes and rock scrambles. I helped work one of the water stations a few years back and the people coming down the hill looked they had been through a war. This is a fun challenge and I’ve run a few of their other adventure races but this is NOT what I need to break into the world of the Half Marathon. I shopped around the internet looking for races. I explored traveling but without knowing what the “trail” is really made of it’s pretty difficult to judge the course. Crushed gravel is OK but some sweet single track  (see example at right) with enough log hops and creek crossings to keep my short-attention span is what I want! I wanted some elevation changes but not sheer hill climbs just for the sake of adding difficulty.  Plus I didn’t want a big race with thousands of runners either. And within driving distance would be nice.! Yeah, I’m pretty picky. Just when I was starting to think I might not find one this year I get an email from one of the race clubs touting the Sloppy Cuckoo Half Marathon! Saturday September 25th. 10AM. 13.1 miles of rolling hills and varied terrain. Limit 500 runners. Just outside Philadelphia. Perfect!

I quickly sent in my registration before I chickened out or made up some kind of excuse. Now I’m committed – like all the other Cuckoos! With just 8 weeks to prepare I set out a schedule then promptly began to ignore it based on the weather. Here’s my training log after two weeks:

In six weeks I’ll post another entry here with my success story – or my tale of woe. =]