Back around 1990 I joined the local “Polar Bear Club” by jumping into a partially frozen river on January 1st. I remember it being a VERY cold day. We had to break some ice away from the river’s banks to be able to jump in. I also remember standing on snow after getting out because IT FELT WARMER THAN THE GROUND. Good times! A few years later I needed a Christmas break photo essay for my high-school photography class and I remembered the Annual Polar Bear Plunge. I arrived on scene with my 35mm loaded with classic black & white film. I snapped a few photos of the plunge, developed the negatives that week, printed/mounted the shots the following week and got a decent grade on the photo essay. I recently unearthed the poster-board on to which I had glued the photos. Rather than just throw it away I have decided to retype my essay correcting only the spelling errors and share it with the world. Ladies and Gentlemen… The Polar Bear Club!

The date is January 1992. The time is 11:59 A.M. The temperature is approximately 34 degrees and the stage is set for the seventh annual Polar Bear swim in the Tulpehocken river at Stone Cliff. This year the number of Polar Bears slipped to five after peaking at thirteen in 1986 but there could be no doubting the bravery of the remaining quintet.

A small crowd of spectators and photographers as well as passers by stood waiting as the local heroes stripped to their swimming suits and prepared for the inevitable [shock] that awaited them. Then as watches and alarms announced the start of a new hour, five figures plunged into the frigid river and, after much gasping and wheezing, swiftly departed the murky waters. Shivering visibly, the five quickly donned warm and dry clothes, thankful that it was over but already anxious for their next opportunity to prove their worthiness of the title Polar Bear. 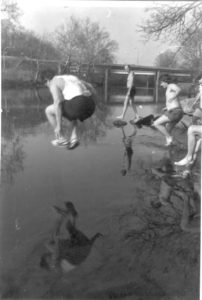 A split second before the Big Chill 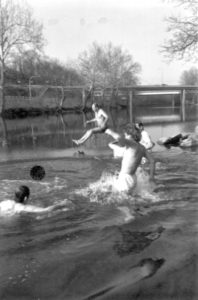 The Polar Bears take the plunge 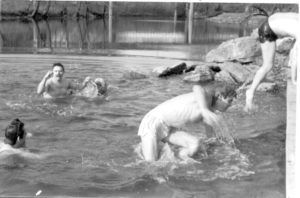 The swimmers hit the beach

Now back to cleaning out the basement (and justifying keeping the flat-bed scanner).