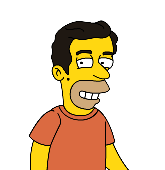 Plot:
Homer’s tom-foolery has grave repercussions for the entire town of Springfield. Can he win back the trust of his family, his friends & his town? No spoilers here. You’ve seen the trailers so you know the basics anyway. D’ome!
Characters:
They plugged a cast-of-thousands and might have hit the mark. Every single character from the show’s 18 years supposedly makes an appearance and I can’t say I had the eyes fast enough to notice them all (especially in the large mob scenes) but all of the more common characters (Even Maggy) at least had a single line. They even dragged in some of the reoccurring guest stars like Joe Mantagna for two lines for Fat Tony. No Sideshow Bob however.
What’s Different:
This isn’t the 22 minute show. They have the luxury of slowing down the pacing, putting in more scenes without dialog & allowing timing jokes to work correctly. The animation itself is the new fangled enhanced 3d-ized stuff with highly detailed backgrounds & special effects that you wouldn’t ever see on a Sunday. They didn’t resort to old gags either. You wont hear Bart say “Eat my shorts!” or see Maggie fall down. You will see plot essentials like Homer choking Bart & Marge hiding stuff in her hair, but hey, you can’t reinvent the show just to make a movie, right? You also get to see them take “Itchy & Scratchy” to the next level, Homer flashing “The Bird” & a bit more about how Otto spends his downtime. Can’t do that in syndication!

Things to watch for:
I’ll have to see it again (and probably again) but there weren’t as many site-gags as I expected. A lot of what I would write about here would be “note which character’s torch goes out in the lynch mob scene” but I didn’t see a lot of stuff like that. I would have died laughing if it was Gil’s torch that fizzles but alas, I wasn’t hired to write the movie. I’ll give you this though: Watch for the ambulance from Season 2’s Bart the Daredevil (Aka Springfield Gorge Aka episode 7F06). In the episode Homer ends up trying to jump Springfield Gorge on Bart’s skateboard. He doesn’t make it and tumbles horribly down the rocks into the gorge. He’s lifted out on a gurney and loaded into an ambulance. The ambulance IMMEDIATELY crashes into a tree and Homer rolls out, still strapped into the gurney and proceeds to tumble back down the gorge. Hilarity then and a fantastic call-back now. Oh, and stay tuned all through the credits. 😉


Final Words:
I enjoy going to cult-following movies the first day because all of the other freaks are there with me. People applauded at the end and a guy was actually dancing in the isle during the credits. You might be too late to get the same kinda crowd that I enjoyed but the bottom line is this: Not everyone there was a die-hard Simpsons fan and they laughed, cried & enjoyed the ride. They left as happy as the fan-boys and that’s the hardest thing to pull off. The Simpsons Movie entertained the masses while somehow not letting the hardcore fans down. Thumbs up!

Heh. I saw his doodle.