Everything is progressing well on the purchase of the new house. Nothing really to complain about except I don’t know where it is we’ll be moving in a few weeks! 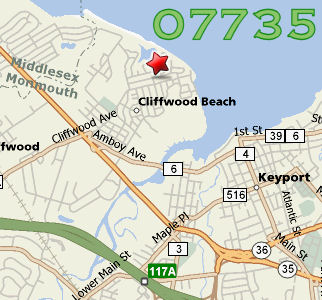 It all started when the insurance folks asked me which county can claim ownership of the land. I blinked… loudly… and proclaimed that I really had no idea! Its on the border you see and my map didn’t have enough detail. I’ve since looked it up and it’s indeed Monmouth but the fun doesn’t stop there, oh no! You see there’s also the zip code to throw monkey wrenches all around haphazardly.  I’ve been hit in the works with a Monk-Wren and it smarts!

This is no arbitrary decision. Hundreds of dollars in property taxes (which we’ve learned are paid to Aberdeen by the way) and preferential treatment by the insurance companies is at stake! I’ve decided that I’m going to say Cliffwood Beach when folks ask where I’m homing up. If they give me the “Oh my god I’ve lived in NJ for [n] years and I have no idea where that is but I don’t want Eric to know that!” look I’ll say it’s in Keyport. If the look continues I’ll just add “Exit 117” and they’ll smile and nod approvingly because everyone knows that’s exactly [n] miles from their Parkway exit.

What was I writing about again? I don’t remember. I’m going to bed. While there I’ll dream of my new house in Keypwood Beach, Monmoddlesex County.